A celebrity novice politician takes the Washington establishment by storm, riding the dark strain of the American heart to an upset bid for the White House.

Philip Roth died this week. In 2004, he wrote a “what-if” alternative history imagining American aviation hero turned Nazi sympathizer Charles Lindbergh runs for president in 1940 and unseats Franklin Roosevelt on an isolationist “American First” platform. Roth published The Plot Against America as a curious peak into an unfathomable parallel universe. But in the age of Donald Trump, Roth’s imagined political catastrophe has suddenly become eerily prescient. 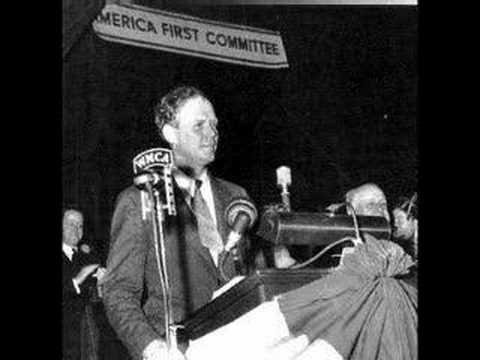 Roth tells the tale of Lindbergh’s political rise from his own childhood perspective. (Be warned: This post is shot through with spoilers ahead.) Lindbergh captured the animal spirits of the Republican Party, winning its nomination for the presidency. Lindbergh is an open anti-Semite—an imminent threat to American Jews like Roth and his family.

Roth’s father, Herman, is a staunch believer in goodness and justice in America, refusing to believe that Lindbergh could come close to the White House. He counts on the guardrails of American democracy to protect Jews. “There was Roosevelt, there was the U.S. Constitution, there was the Bill of Rights, and there were the papers, America’s free press.” Ultimately, all of these guardrails would give way to Lindbergh’s ascent.

Lindbergh’s campaign was at first dismissed by the establishment as a “publicity gimmick,” as he flew himself in a solo plane from rally to rally across the country. Lindbergh was at once both a plainspoken common man with a flat, “decidedly un-Rooseveltian” affect, and a superhuman living legend. He played on nostalgia, reminding Americans of his heroic flight across the Atlantic, “and it was 1927 all over again.”

His message was simple: FDR and other elites were duping the American people into war. Lindbergh would keep America out of World War II. “Vote for Lindbergh or vote for war.”

Roosevelt, for his part, campaigned on a sense of inevitability—as too busy with the serious business of governing to be bothered by Lindbergh’s “carnival antics.” When told that Lindbergh had won the GOP nomination, Roosevelt remarked, “By the time this is over, the young man will be sorry not only that he entered politics but that he ever learned to fly.”

In the run-up to the election, polls showed Roosevelt running comfortably ahead. The polls were wrong. Republican party leaders left Lindbergh’s campaign for dead, frustrated by the novice candidate’s insulated campaign.

Lindbergh shocked the world by winning in a landslide. Republicans seized control of Congress, too. Pundits latched on to a series of comforting rationalizations to explain Lindbergh’s blowout win: The country had rejected FDR’s bid for a third term. Lindbergh’s aeronautic feats were what the country needed to venture into the future. Anything to explain away the appeal of Lindbergh’s openly fascist campaign.

Before even being inaugurated, president-elect Lindbergh met with Axis leaders to negotiate peace with the United States. The American public overwhelmingly supported Lindbergh’s efforts to keep U.S. troops out of the war. They praised Lindbergh’s deal-making skills, and the apparent respect he commanded from Hitler.

Within weeks of the election, brash public anti-Semitism begins seeping out of the American woodwork. Bigots emboldened by political fortune saw fit to flex their newfound muscle in American life.

Upon taking office, Lindbergh launches a new Office of American Absorption to “Americanize” Jewish city kids by enlisting them to work on farms in the Midwest as a sort of summer camp. Yet while America’s Jews lived in horror of the new administration, much of the rest of the country celebrated peace and prosperity. The stock market boomed, and world war remained someone else’s problem. Eventually, a numbness and sense of normalcy set in across most of the country.

But Lindbergh’s insidious rise changed the fabric of the country. He invited the Nazi Germany foreign minister to visit the United States, leading former president Franklin Roosevelt to emerge from the sidelines and speak out. Lindbergh’s Nazi-friendly stance created the social space for American Nazism to go mainstream. The true terror of the Lindbergh presidency was what it brought out in regular Americans. America became a meaner, more violent place.

Roth’s counterfactual history has a tidy conclusion that folds the country back into its previously interrupted political order. By the close of The Plot Against America, the dark age of Lindbergh turns out to have only been a two-year interregnum in American history before the country returned to its senses.

Will our own political moment pass so cleanly? Many Americans that are rightly distraught over Trump hope for a deus ex machina from Robert Mueller or the 2020 election. Yet the political tectonics and simmering resentments that unleashed Trump will not soon fade; the most we can hope for is dormancy.

Plus, the retrospective of history has its own way of deluding us into faith that a comfortably reassuring logic and order prevails. “Turned the wrong way round,” Roth wrote, “the relentless unforeseen was what we schoolchildren studied as ‘History,’ harmless history, where everything unexpected in its own time is chronicled on the page as inevitable. The terror of the unforeseen is what the science of history hides, turning a disaster into an epic.”

In the aftermath of Watergate, Vietnam, the impeachment of Richard Nixon, routine economic shocks, and the upheavals and violence of the late 1960s onward, the United States desperately needed a reset in 1976. The man Americans turned to that year was Jimmy Carter.

Regardless of Carter’s ultimate performance in office, his presidential campaign is a useful touchstone for what resonated with Americans as a viable path forward after years of chaos and government by vengeance. 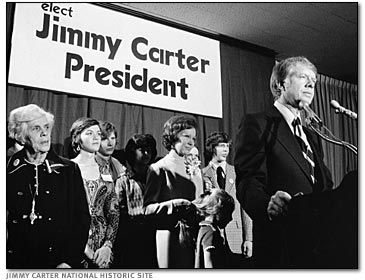 In The Invisible Bridge, Rick Perlstein keys in on one speech Carter delivered in Watts, California, in June 1976 at the dedication of a new wing of Martin Luther King Hospital.

Carter began by discussing King’s legacy, and what King meant to him as a southerner. He then appealed to the unachieved promise of America, before launching into a clear and direct vision he sees for America:

The America we long for is still out there, somewhere ahead of us, waiting for us to find her.

For all our progress, we still live in a land held back by oppression and injustice.

The few who are rich and powerful still make the decisions, and the many who are poor and weak must suffer the consequences. If those in power make mistakes, it is not they or their families who lose their jobs or go on welfare or lack medical care or go to jail.

We still have poverty in the midst of plenty.

We still have far to go. We must give our government back to our people. The road will not be easy.

But we still have the dream, Martin Luther King’s dream and your dream and my dream. The America we long for is still out there, somewhere ahead of us, waiting for us to find her.

I see an America poised not only at the brink of a new century, but at the dawn of a new era of honest, compassionate, responsive government.

I see an American government that has turned away from scandals and corruption and official cynicism and finally become as decent as our people.

I see an America with a tax system that does not steal from the poor and give to the rich.

I see an America with a job for every man and woman who can work, and a decent standard of living for those who cannot.

I see an America in which my child and your child and every child receives an education second to none in the world.

I see an American government that does not spy on its citizens or harass its citizens, but respects your dignity and your privacy and your right to be let alone.

I see an American foreign policy that is firm and consistent and generous, and that once again is a beacon for the hopes of the world.

I see an American President who does not govern by vetoes and negativism, but with vigor and vision and affirmative leadership, a President who is not isolated from our people, but feels their pain and shares their dreams and takes his strength from them.

I see an America in which Martin Luther King’s dream is our national dream.

I see an America on the move again, united, its wounds healed, its head high, a diverse and vital nation, moving into its third century with confidence and competence and compassion, an America that lives up to the majesty of its Constitution and the simple decency of its people.

This is the America that I see, and that I am committed to as I run for President.

Carter argued that America deserves a government that lives up to the best of the country’s promise and character. He envisioned a new administration that roots out corruption and unwinds a system rigged for the rich. He vowed to pursue the dreams of employment for all and high-quality education for every child. He promised to be a positive force for American society and government—one in touch with the pain, dreams, and strength of the American people.

It’s a utopian vision, as all progressive visions must be. Progressives wish to improve society to achieve the promise of America. Implicit in that wish is faith that those ideals and values can be achieved by flawed, mortal human beings. The inherent hope and optimism in that faith must be reflected in the vision and speeches of progressive leaders.

Former Obama White House aide David Axelrod has a theory that presidential incumbents are consistently replaced by their polar opposites. “Voters rarely seek the replica of what they have,” Axelrod wrote. “They almost always seek the remedy, the candidate who has the personal qualities the public finds lacking in the departing executive.” The “grandfatherly” Dwight Eisenhower was replaced by the young, vibrant John F. Kennedy. The cool-headed, cerebral Barack Obama replaced the trust-your-gut, down-home George W. Bush. Obama in turn was replaced by the antagonistic, emotion-driven Donald Trump.

In the dark, chaotic days of the Trump administration, voters may again seek an opposite come 2020. After a presidency defined by cynicism, bellicosity, trenching division, and resentment, Americans may look for the opposite: a politics of hope, love, and optimism. A spin on the forward-looking politics offered by past progressives like Carter and Obama.

Carter’s speech was titled “The Power of Love.” And in 1976, Perlstein writes, “people yearned to believe.” They may yearn again come 2020. Donald Trump has offered a fundamentally negative vision—of American carnage and a crippled America.

Progressives must be prepared to counter this vision by explaining the hope they see for America. They must paint a vision for American voters — one that doesn’t react to Trumpism, but that transcends it entirely. The power of anger can only be vanquished by the power of love.